Taken from the ancient Elven word for 'outcast', Do'bluth is a haven for skulduggery and villainy. Similar to most Drow cities in that it's full of temples (nearly as many non-Lolth as Lolth ones) military outposts and slave-pits and the first thing people notice about its populace is that there are far more non-Drow than others of its size. This diversity is something the Drow of Karrash-Morr are very proud of.

The city is ruled solely by the Illharess of House Karrash-Morr advised by council made up of members of the Crimson Guard, Nobles and assorted members of the house. In previous times the Crimson Guard held power comparable to that of the Matron, but after Al'Death Karrash-Morr's ascension to the position of Val'Sharess the Guard ceded overall control of the city to the Drow, in return for complete control of the peasant sector unhindered by any laws the nobles create and control of the 1st Army. This arrangement stands to this day under the new Val'Sharess, Ginafae Karrash-Morr

House Karrash-Morr also own Skarsferry Below, the former home of the Exiles, who gifted the former Val'Sharess the city in payment for her protection of their members. No maps of this city are known to exist publicly, and access to the city is well guarded.

The city layout is generally comprised of "wedges" stretching from the central hub towards the outer walls in the style of a web with almost half of the total area now comprised of the urban sprawl that is the Peasant Quarter. The other half includes regions set aside for noble housing, military and scout training and barracks, food production regions and the well-avoided expanse colloquially known as the 'Elkantaar fallout zone' containing the obsidian tower, ritual circle and the dryder pits.

The personal residence of the Illharess takes up the entirety of the central pillar of the cave that contains Do'bluth. The 'Gin Palace' has always been a highlight to all those welcomed to the city and is maintained by a loyal army of slaves, gelded and with their tongues removed to allow no distractions from their duty. The palaces guest quarters are always prepared to receive nobles from all factions willing to know more and embrace the glory of the Underdark, and are designed to offer conditions even the most noble of the drow families regard as decadent and it's giant halls always prepared for a feast.

The Drow region of the city, the blood-tied house members reside in spires and towers located around the Val'Sharesses Palace, hewn inside a colossal central spire with fortifications at its base resembling the hub of a giant web or wheel. Walkways, bridges roads and tunnels jut out in all directions connecting it to everything within the edge of the city except the ritual circle, like arteries connect a heart.

This main portion of the city is barely controlled chaos. Comprising of almost half of the web of Do'bluth, the peasant quarter (or 'monkey zone' as it's colloquially known) is under the stewardship of Baran Ironfounder, Lawmaster of the City and commander of the Crimson Guard, who's straightforward philosophy of: "If I have to get involved there WILL be trouble" rules effectively and efficiently through fear.

Containing everything from brothels and barracks to forges and financiers, this region is the lifeblood of the city and it ticks like an abstract but well-oiled machine. Murder, mugging and violence are commonplace and this is actively encouraged by the nobles who live elsewhere but use it as a selection and proving ground to hand-pick those with the survival qualities to join them and accompany the Valsharess on her visits to the surface to represent the house and faction.

The racial make up of this region is vastly diverse and ronin-Drow, sentient unliving and even a handful of Norn rub shoulders with humans, goblins, beastkin and assorted others, all of which are eligible for selection for the nobles as long as they live long enough.

The Elkantaar fallout zone, named after the houses eccentric former-ritualist, is a closed-off and even more dangerous region of Do'bluth. It's main feature is the gigantic Dryder pits, caged over the top, that starts with a buffer zone at the edge of the palace-hub and reaches off into the darkness of the city limits. No one knows exactly how many Dryder are caged there but it is estimated in the dozens if not more. From within this pit, two key structures rise up to dominate the horizon: the Ritual Circle and Elkantaar's Tower of Magic.

Forbidding and ominous, The Obsidian Tower is the birthplace, whilst the broom closet is the home, of Experiment and her minion Number One, keepers and seneschals of the creatures and oddities within. Ranging from animated statues to invisible pets to floors that re-arrange themselves, nothing in this tower should be taken for granted. The rumour is widely spread that the tower is a conduit of pure chaos and that those who enter seldom return with either their sanity or limbs intact for good reason, and it is believed that this chaos can 'leak' into the rest of the city, helpoing to cement Do'Bluths reputation for always being 'interesting'. Elkantaar himself is long gone, his only remaining fetter to this realm being a magical tome that has trapped the essence of his insane sister, he now exists as a spider-demon of the void. The Tower has been left to Experiment and Number One now... 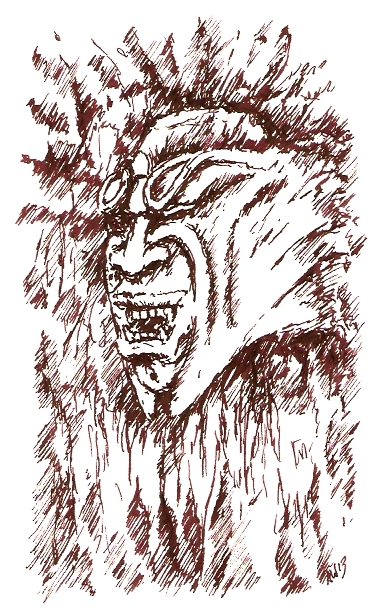 Amongst The best known Underdark circles among the "hired" fraternity, it has in the past been used by various factions and guilds to dispose of 'identifiable' corpses via its infamous Dryder pits. As the only magical means of entering the city it has 2 simple defences; its only remaining access to the city is over a long guarded narrow bridge leading straight into the peasant quarter, and the Dryder pit lid mysteriously disappeared in the circles vicinity.

Nothing is illegal to trade in Do'bluth, everything from slaves to Dryder silk to surface herbs to information is traded freely, with taxes levied on a 'needs' basis - an initial toll is paid for admission into the city for trade but taxes are only collected when gold is required otherwise merchants are just left to their business, although the most successful of these are wise enough to 'donate' to the ruling house to ensure free and unhindered passage.

Religion is a straightforward issue: you WILL honour the Ancestors, preferably Lolth. All dark Ancestors are tolerated and competition/bloodshed between them is encouraged, however everyone knows better than to turn on Lolth - Do'bluth may be an 'open' city but no one is under the delusion that anyone challenges the Val'Sharess' Ancestor and lives.

The highlight of the Do'bluthian calendar is the Great Dryder Run when, at a different time each year and without notice, the Dryder pit gates are flung open by the nobles and these accursed creatures are set loose to rampage throughout the Monkey Zone. This practice fulfils a few socioeconomic functions:
1: Population control; those unable to defend themselves or hide from the Dryder forfeit their place in Tarantulan society. And life. The canniest of denizens have constructed their own Dryder-proof shelters, but others relish the challenge and some nobles even pay to join in the fighting.
2: Military training; they are given an hours notice, sent to guard all the temples and are expected to fend off the Dryder. If they survive then they are rewarded with the honour of being allowed to keep their jobs in the military. And their lives.
3: Entertainment for the Nobles; huge sums of money change hands during this one day with nobles from all over Erdreja invited to attend and wager on every eventuality imaginable.
4: Exercise for the Dryder.

The Gathering of Nations 1099

The greatest Gathering to have ever happened was held in Do'bluth, then ruled by Illharess Al'Death Karrash Morr, who was chosen by Lolth to become the Faction leader the following year.

The surface world again returned to Do'Bluth under the rulership of Val'sharess Ginafae Karrash Morr, althouhg this time to the settlement that has built up by the Underdark entrace. Also revealed were the 'Deamons of Do'Bluth', a local phenominon of daemonic visitation through a bargain struck alloeing them free-reign of the circe to move from their realm to ours.