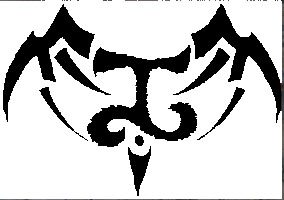 House Mlezzir is the noble house of clan Keltormiir, one of the original Aquillari clans who sided with the Dark Elves during the Sundering. The original Aquillari lands were closest to the great ocean in what would now be northern Cymria. From here our clan forebears built the great haven of Erest, where wytchwood ships were crafted to explore the great oceans and be instrumental in mapping the egg, Erdreja.

The house was founded by Kanchelsis Keltomiir, born to Kal'an'ath and Rian Keltormiir. A notable mage of the Elven White Council and apprentice to Lyander, (the scion of the Elven mages), who went through the rite of dissolution from the Dragon-Born clan founder Ma'azbiir. Soon after this separation Kanchelsis retired to his tower, there to research the demonic teachings of his former master.

The symbol most common seen for House Mlezzir is based on the Dark Elven Runic symbol for Ma'azbiir, featuring the addition of skeletal "wings" portraying the demonic heritage of the household.