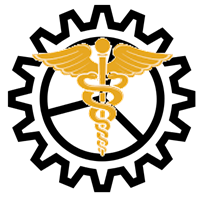 The Bickerstaff Institute is a recent arrival to the Underdark, having only made their home in the Tarantula nation in 1116.

A mainly human group, the Institute dedicates itself to the application of medical knowledge in providing aid to all those who need it, without discrimination. In recent times, however, the knowledge of the Institute has grown to include the medical treatment of those labelled “Unliving” by the majority of Edreja, and has almost become the sole focus of the Institute.

To promote the goals of learning and self awareness, the Institute, with generous help from the Tarantulan hierarchy, encourages all of its human members to take part in the ritual of Awakening to fully explore the potential of all its staff and students.

The Bickerstaff Institute can be recognised by the Institute emblem a Caduceus symbol atop a working machine cog. This emblem was chosen to represent the Institute’s main purpose, that of delivering schooling and practice in the medical arts, with the cog representing the progress and hard work by all members of the Institute.

Members of the Institute will choose to wear the emblem in a variety of ways, but the most popular is the small badge applied to an outer garment of clothing.

More senior members of staff may also choose to wear the emblem of their Faculty alongside the Institute emblem, either of the Executive, Apothecary or Spellworking schools.

In order to conduct proper relations with the Tarantulas and abide by the culture of the Matriarchy, the Institute has established an honourary position that will be held by a high ranking female in the Institute. She will be the main point of contact within the Institute for any Matron Mother or the Valsharess if they require anything from the Bickerstaff Institute.